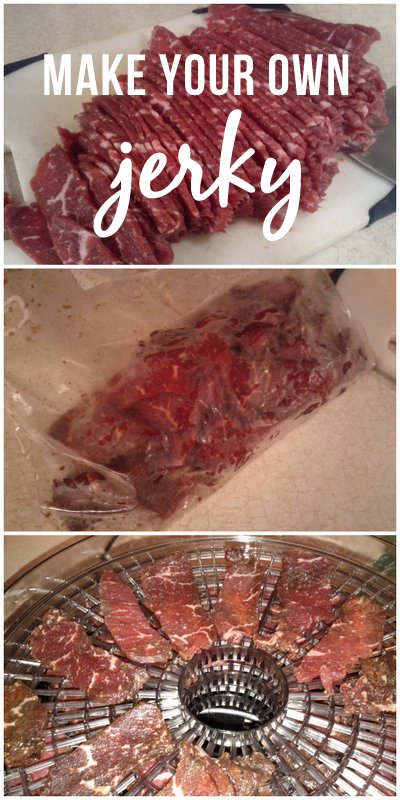 Since reading the The Hungry Hiker’s Book of Good Cooking by Gretchen McHugh I’ve been wanting to try to make jerky. I’d always assumed it was hard to make, but it’s not! With Gretchen’s instructions and recipes for marinade you can make your own jerky in your dehydrator or even your oven.

Tip: When making jerky, freeze the meat before slicing!
Following the instructions in the book I froze the steak I bought. Then I let it defrost just enough to slice with a heavy meat cleaver. Having the meat still firm and icy made cutting it in very thin strips really easy. After I got it all sliced I put the meat in a Ziploc bag with the marinade and put it in the refrigerator for about 48 hours.

How to dry jerky in the dehydrator:
I have a Ronco dehydrator so I turned that on and laid the strips of meat on the racks. Normally I’d keep adding racks and fill the dehydrator with as much produce as I can, but I was afraid the meat might flavor my fruits and vegetables so I decided to just do the jerky this time around. If you don’t have a dehydrator you can lay your strips of meat on a greased baking sheet and place in an oven at about 140 degrees. The Hungry Hiker’s Book of Good Cooking says the jerky is ready when cracks in two when you break it.

How long should jerky dry?
Our jerky took about 20 hours in the dehydrator to dry completely. Some of the thinner slices were ready within hours, but I went ahead and left it all in there overnight. This morning it was all perfectly done. My husband took it to work and all the guys are raving about it. 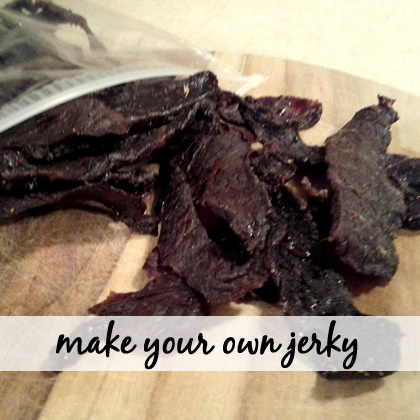 Making your own jerky is easy and affordable.
I was really surprised at how simple it was to make and at how much jerky one steak made. We spent about $9 to make a quart sized bag full of jerky that is not only tastier but also healthier than the store bought jerky which is full of preservatives. I’m going to stop by the local meat market this afternoon and see if I can pick up some more steaks. I’m hoping they’ll be fresher and cheaper than the ones in the grocery store.

Have you ever made your own jerky?

Erica owns MomPrepares.com and enjoys helping women learn to prepare for life. From emergency preparedness to food preservation, Mom Prepares covers it all!
Erica is married to Ryan and is the mother of their two little boys.